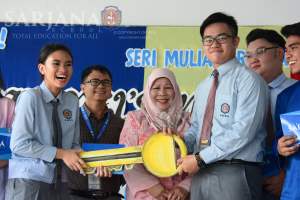 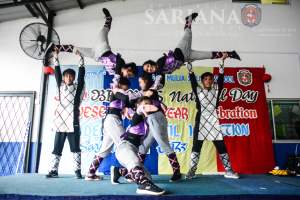 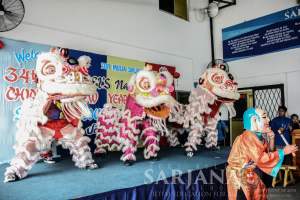 On the 3rd of March this year, the secondary section of Seri Mulia Sarjana School celebrated their first free day of 2018, in conjunction with the Chinese New Year and the 34th National Day of Brunei Darussalam. It was a day filled with remarkable performances, and most notably the honouring of last year’s Supreme Student Council (SSC) officers, and more.

The arrival of Dr Mary Lim, SMS School’s founder was well received by everyone. To start iff the National Day section of the event, everyone at the event were asked to sing the national anthem with tremendous pride. In addition, a student recited the Surah Al-Fatihah and a prayer from Abdul Hakeem bin Ilham of class 11C. Furthermore, Uncle Bahren, the HSE officer for the secondary section gave a few safety reminders so that students, teachers, and other attendees are aware of what to do in the instance of an emergency situation. Also, the national pledge was delivered by Khairul Nabawi of class 10B. In addition, the Islamic Culture Club delivered a Tausyeh performance that was rather patriotic and beautiful. Then, a representative of Hand for Hand charity was invited to the stage along with Dr Mary Lim, and secondary section principal, Cikgu Gazala binti Abdullah as they formally handed over the cash donations. We totally collected a staggering $1,382.10 donation! Lastly, another performance was carried out, but this time by the Musical Ensemble Club performing their impressive Gulingtangan performance titled ‘Dang Mengalai’.

In the second half of the event, we were greeted by valuable information related to Chinese New Year. In addition to that, our secondary principal Cikgu Gazala was invited to the stage alongside Teacher Joan, the Supervisor for Academics to present the certificates for the officers of each CCA club for this year. Furthermore, we were extremely fortunate to watch Dance Synergie perform exquisitely their ‘kung fu chinese dance’, also known as ‘spring dance.’ Also, the ‘turn over ceremony’ was carried out from the previous SSC officers of 2017 to the SSC officers of 2018. Next, to complete the appointment was the induction of officers led by the Senior Master of CCA, Teacher Archivald Queri. Last but not least, the iconic lion dance performance, and it was extremely sublime, and it is definitely vital for Chinese New Year celebrations!